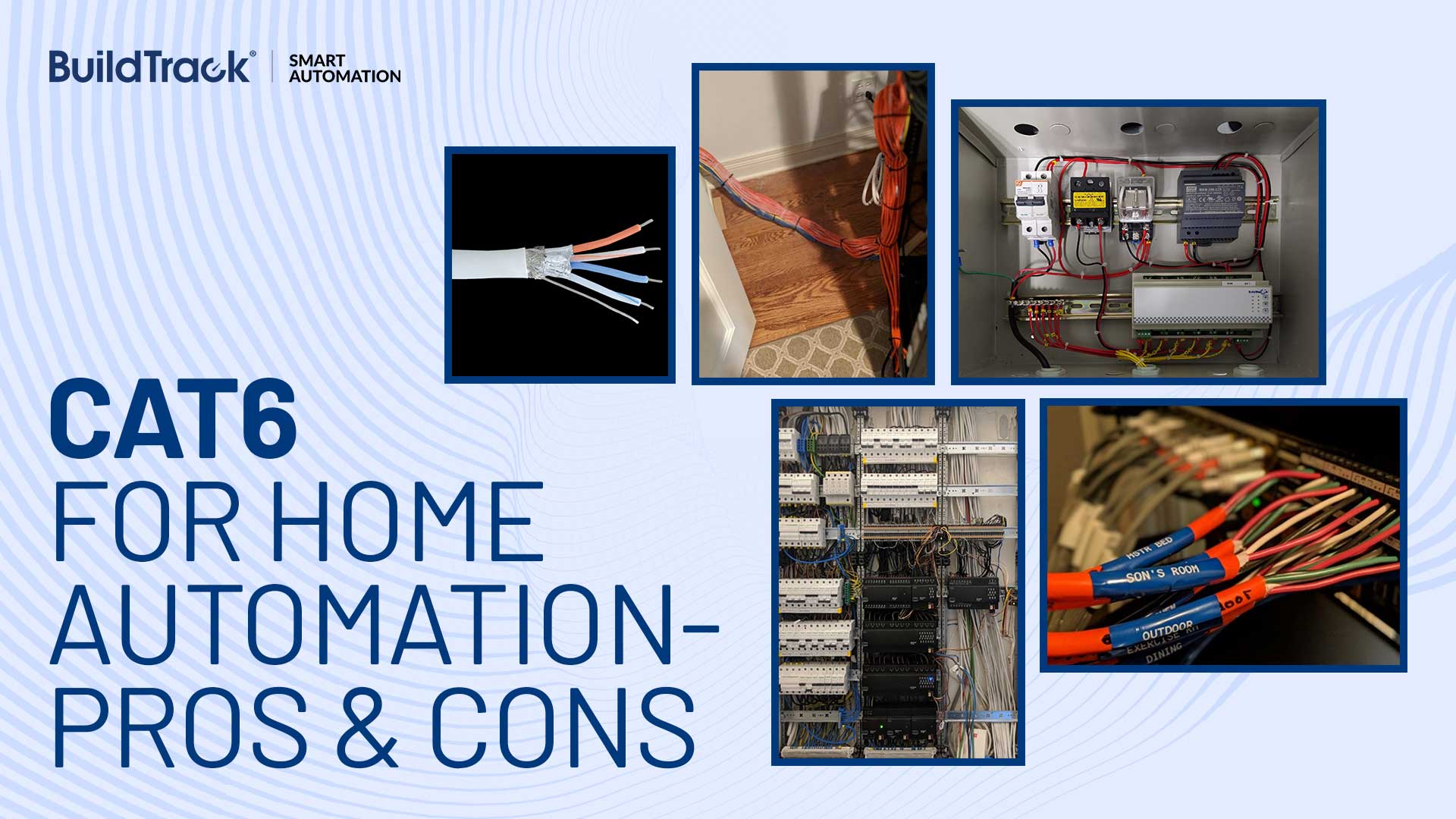 When it comes to Wired Home Automation, all options are not created equal. There are distinct differences in how the various wired systems run across your home, from the point where they start which is usually the individual switch circuits that they control, to the point where they end, which is usually at the control center or hub or gateway where they terminate in a home. This article intends to share some information about the nature of the differences across the 3 types of wiring systems commonly encountered in Home Automation systems

We are all familiar with CAT6 cables as the cables that we all used to connect our computers to the internet before WiFi became prevalent everywhere. This is the cable that is used for all IT networking needs. The connectivity that this cable requires is point-to-point, so every switch/device that is to be automated, needs to be connected by one of these cables to the controller/hub/gateway through which the commands flow to and from them. This point to point arrangement is the easiest to understand, but at the same time results in the head of an octopus at the receiving end where many tentacles or individual cat6 cables come together. The mass of cables that travel through the house can be enormous and the challenge of labeling them for identification and for trouble shooting them in situations where things go wrong can be quite a challenge.

Figure: Typical Wiring visible for a CAT6 based Wired Home Automation System looks like an “Octopus”

The other challenge that can arise for large homes in using CAT6 is that the maximum allowed length can be only 100m before you need to put Ethernet Switch to extend the length beyond that.

While the cost per unit length of CAT6 might seem low, the point to point nature of these will require considerably more length of cable to be purchased. In some Home Automation situations power can also be transmitted over these cables (Power over Ethernet or PoE). While helpful, we will see that this is not a unique proposition for this type of wiring alone. In most cases, the switches that it connects to are just electronic buttons with no relays present, so all the relays are located in a centralized box along with the controller/hub. So this type of system will not work with conventional toggle switches either because there is really no control of the device at the location of the switch, all the control happens through the relays located at the centralized controller/hub location. The vast tentacles of wiring also means that conventional conduits that carry your electrical wiring may not be able to handle this mass of CAT6 cables and we also need separate conduits to run CAT6 because of its interference issue with other cables, this situation leads to an increase in cost of both labor and material and additional planning during construction. Post construction also, this system architecture requires a specialized support team to perform any service as local electricians will not be able to handle such a specialized system.

Perhaps the most critical issue to contend with for a CAT6 system, is that the load is not connected to the switch itself. This is because the switch is only a communication mechanism to the controller where the relays that control the load actually reside; hence the load is wired to that location. Typically these controllers and relays are at some other central location like the MCB box, and not at the point where the switch is located. If the users at any stage in their lifecycle, decide that they would simply like to replace their electronic switch by a conventional switch, it is not possible. Since the load is not connected to the switch location there is nothing that a conventional switch can do to serve as a replacement. This is one of the biggest shortcomings that we see with situations which have deployed a CAT6 based system.

These systems typically run much leaner that CAT6 systems. In contrast to the point-to-point system, these systems are ‘bus’ systems, ie. There is a single loop (or bus) of wire that runs through the home from the controller and drops are taken from the wire to the points where the light switches, AC control device etc are placed. It can be quickly observed that there is no “octopus” tentacles at any point in this system. It is a clean system with minimal wiring. The wiring can also be carried through in the same conduit as the electrical wiring as long as the cables being used are twisted pair to neutralize induction and are also double shielded to minimize interference. The maximum length across which these cables can run is almost 5x times more at 500m length.

While the cost of these cables can be a bit more than the CAT6, the lengths required, the shared conduiting and the labor and complexity reduction alone compensate for all of it. The maintenance during operation is also far easier when you don’t have to deal with the myriads of cable bundles running through the home. Typically these cables can be used by systems where the relays are distributed behind the switches or centralized with the hubs. In the case of BuildTrack we have developed RS485 nodes that can sit behind existing switches or are part of our touch switches where the relay is located at the point of the switch itself. Alternately we also provide the ability to centralize relays for some of our nodes and touch switches for situations like hotel rooms where it makes sense to do so on a localized room basis. Similarly the power required for the local relays can be sourced at the location of the switch itself, just like in conventional switches. So if for any reason you desire to remove the automation you still have the option of installing conventional switches. This option is lost when you use CAT6 cables as locally the switch is just a dummy communication device and the actual relay that controls the power to the light/fan etc is located elsewhere, centrally. The nodes for BuildTrack also offer an alternative of receiving power over the RS485 cables. This can be helpful if you want to protect the nodes from any surges in the electrical supply by ensuring a stable power source that provides it with DC power over the RS485 cables.

Figure: Typical Wiring for a RS485 bus based Wired Home Automation System is much SIMPLER

One of the most important benefits of the bus based system like RS485 is that unlike the CAT6, the load wires all terminate at the location of the switch itself. So if at any time during the lifecycle, the users wishing to replace this system with a simple conventional switch, can simply swap it into the same spot within minutes. This flexibility is lacking in the CAT6 system where one can only replace it with another CAT6 product or redo the rewiring of the whole space again to bring the load wires to the switch locations.

There are not too many differences between the RS485 or TP1 (KNX) bus systems, except in economics. The cost of the RS485 wiring tends to be substantially lower amongst the two, due to its broad range of use across various industrial systems and there are also much more options for vendors who provide the.