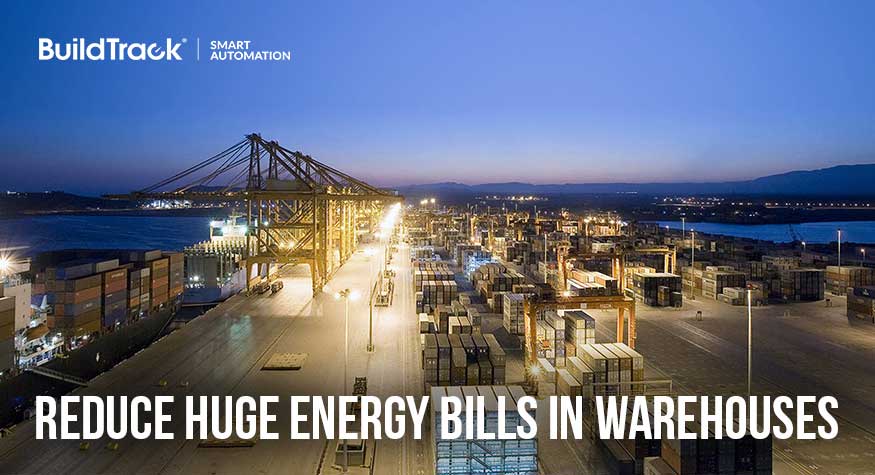 Residential and Commercial spaces are always the pursuing energy conservation measures, but Industrial buildings and warehouses are often neglected in this area, often despite huge energy bills because what is inside them are considered more important than the operations of the buildings themselves.  These represent a huge potential for energy efficiency and this article highlights some great opportunities for reducing the energy bills. Typical industrial or warehouse facilities can have some of the below elements that consume energy.

The last item on the list, i.e. machinery that is directly functional towards production and material handling is often used as per requirements of the business. It may be more difficult to conserve energy or take efficiency measures on it. However, the other load components mentioned can be controlled to achieve the best possible energy efficiency.

HIGH MAST LIGHTING: If the industrial or warehouse space has high mast lighting then there is potential for savings if it currently uses metal halide lighting. Most high mast lighting typically use 12-15 light fixtures and by replacing metal halide with LED flood lighting, the electrical load can be reduced by nearly 50%. A centralized control can be integrated for to control (switched ON) as required from a remote location or via Smart Apps, alternatively scheduling can also be done based on operating shifts to reduce the usage. The solution can reduce the high mast energy consumption by further 10-20% with payback periods within 10 – 12 months.

INTERIOR LIGHTING: Offices have lighting operating at most hours often even during the daytime, and even if the format is LED, a 10-15% of energy savings.  Lighting energy is often wasted in an office space especially in the conference, meeting rooms, restrooms, aisles, lobbies and pantries. Motion Sensor based solution for controlling these loads provide the best returns without needing to change existing lights and often wireless motion sensors can be deployed within finished offices, to retain the aesthetics of the finished spaces, without adding wiring. The savings possible on these loads on adopting the solutions is around 15 – 20%, with payback often being under 12 months

AIRCONDITIONING: These are higher consumers of energy than power. They are present not only in office spaces of the facility but also in parts of substations. Variable Frequency Drives (VFDs) used to operate the various Motors in the facility and VFD controls are installed in separate rooms other than the panel rooms of the substations as they require air conditioned space. These air conditioning units often operate 24×7 and also have standby air-conditioning units due to the criticality of the equipment. In many situations these “Drive Rooms” are overcooled beyond the required 24°C, thereby consuming more energy. A centralized AC control can be installed to encompass the control of all split units across the property. These centralized AC control systems which operate multiple split ACs can also monitor the room temperatures to turn them ON/OFF more effectively, allow for switching between the working and standby units as per schedules, allow centralized status monitoring and control, run the units as per schedule and control the set temperatures centrally. Around 15-20% reduction in energy consumption with 12-14month payback is achievable in most situations.

CONVEYER & EQUIPMENT LIGHTING: Lighting on conveyors and equipment is an opportunity because such lighting stays on even when not needed. Often conveyor lights are installed throughout the belt and can run several meters long. They can be operating throughout the night time (approx. 10 hours) and in an enclosed conveyor belt, operating 24 x 7.  The same holds true for much of the production equipment which are well lit. These lighting can be efficiently controlled with wall mount occupancy/motion sensors, but multiple sensors would need to be placed as needed. There is a huge savings potential with energy savings often around 60-80% and the payback within 10 – 12 months.

MOTORS & PUMPS: These are high capacity units whose consumption of energy and operating status can be monitored if their Panels allow for connectivity via Modbus protocols. This is beneficial if remote monitoring and centralized control of these can provide means of reducing energy consumption of such units. It is sometimes feasible to monitor the current consumption to even trace operating issues if it operates at levels beyond the specifications, which is an added bonus of safety.

These solutions for energy efficiency can be often adopted without disturbing the current electrical system. An IoT or Smart Automation system consisting of sensors, nodes and gateways can be overlayed in the facility to quickly provide the autonomous or centralized control and the monitoring required delivering the energy efficiency.

One thought on “ENERGY EFFICIENCY IN INDUSTRIAL FACILITIES & WAREHOUSES”