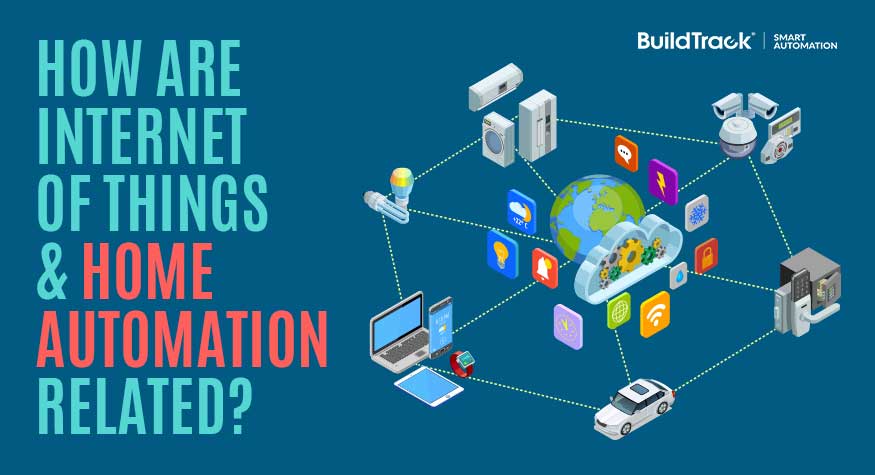 HOW ARE IoT & HOME AUTOMATION RELATED?

IoT or Internet of Things refer to devices that can be connected to the internet and can be communicated to or from via internet.  These devices could include:

Sensors – including but not limited to sensors for safety monitoring, health monitoring, equipment monitoring

Cameras: typically these are cameras that stream their images via the internet

Appliances or Equipment- these could include sensors and actuators integrated into the appliances such as microwaves, refrigerators or equipment such as MRI machines, hydraulic presses and more.

CAMERAS: Videos door phones that allow users to communicate with guests at their door

ACTUATORS: Typically these are devices that control the switches and plug points that are seen at home. These switches may be used for lighting, dimming, fans, speed control, curtain motor control or more.

IR BLASTERS: These are used to control any and all IR devices that exist in the home; typically these can be Air Conditioners, Fans, Heaters, TV’s, STB, Music systems and more

THERMOSTATS: These are typically combinations of sensors and actuators to control the AC or heater while sensing the ambient temperature.

In the past these Home Automation devices operated locally when users were present in the home. The user would use either dedicated electronic displays that connected with these devices, or they would use remotes or the like to do the same. Now, most of these devices that are mentioned above can be connected to the internet and connect with the user irrespective of their location as long as the user has access to the internet and often use any device connected to the internet (E.g. computers, tablets, phones). So Home Automation devices have increasingly become part of the “internet of things”. Nearly 91.1 per cent people in the country are keen to experience a reality where Internet of Things (IoT) devices could make their lives simpler as they would be able to monitor and manage their home appliances remotely in real time, says a report.  The report ‘India IoT’ published by Tata Communications revealed that more than 65 per cent people suffer anxiety over leaving lights or other devices on when they are away from home or for the safety of their home, and believe that connected technology could help alleviate this.

An article by Economic Times says, A survey, which was conducted across 2000 respondents from 12 Indian cities to gauge the awareness levels of people about concept of IoT and views on its impact, has revealed that domestic automation appears to be a “near-necessity” for India’s youth as nearly 54% of India’s youth believe IoT is all about smart homes having connected devices and smartphones.  Less than one-third (67%) of the people aged over 35 years see IoT-enabled devices and services could create “exponential value” in the areas public services such as energy conservation, lower pollution, better treatment and disposal of waste, better access to public utilities and healthcare facilities.