Home   »   HOW TO TAME YOUR ENERGY GUZZLING AIR CONDITIONERS! 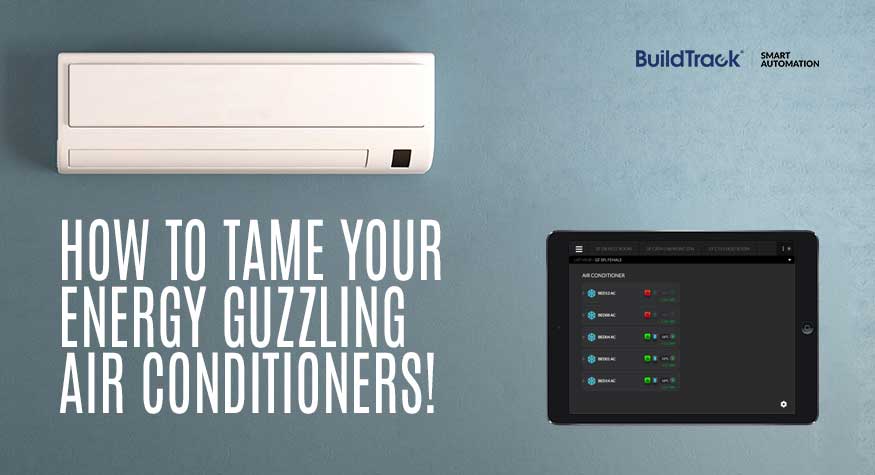 HOW TO TAME YOUR ENERGY GUZZLING AIR CONDITIONERS!

Like any office you have lighting, air conditioning and other miscellaneous items like computers that are needed to operate the office and they all consume energy. Typically though, Air-conditioning is by far the largest culprit when it comes to energy consumption, often responsible for consuming up to 35-50% of the total energy bill in any office space.

Almost all offices have Air Conditioners, usually several of them of different ages and brands scattered through cabins, seating areas, server spaces and conference rooms.  The types of ACs is often a mixture of Window units, Split units or VRV/VRF (Variable Refrigerant Volume/Variable Refrigerant Flow)  Most ACs tend to be individually controlled by users using IR remotes or directly through the power supply for older window units.

Often, in summer it is inevitable to have to run ACs to keep a pleasant temperature in the work environment for the productivity and health of the employees and any customers who might visit the space. So is there anything that can be done to tame this energy guzzling, but necessary item in every office? The good news is that there are many options to tame the energy consumption, but often these are overlooked by many enterprises.

The opportunity to change the energy footprint of any AC exists because it is often true that a significant portion, anywhere between10-30%, of the energy consumed by air conditioners is wasted as they stay ON despite the fact that there are no occupants in the space to experience the cool air that they are providing at significant energy cost.

But that is not the only reason, so we have listed a number of reasons that typically result in wastage of energy by ACs

This type of wastage if eliminated can contribute towards significant lowering of the energy bills for any office.  Generally companies don’t pursue these opportunities because they think of the challenges in addressing such type of wastage, such as

Companies like BuildTrack have addressed this issue through multiple solutions such as wireless control of existing ACs, Sensor control of ACs, Centralizing of ACs for Scheduling and more. Most of these solutions can be retrofitted to existing ACs, and many don’t need to alter the aesthetics of finished office spaces or need rewiring to reap the benefits with a significant impact on energy consumption and bills. The average daily consumption of each air conditioner (1.5TR) is 12.5 KWh and typically 15-30% of this consumption can be reduced through a combination of Scheduling, Auto-ON/OFF when people are present/absent, Re-setting temperatures to reasonable levels, Shutting OFF ACs that are consuming current beyond their specified limits (fire hazards). Payback is often between 6-15 months.  BuildTrack is the 2 time winner of Excellence in Energy Management Award by CII and also rated 4star by Bureau of Energy Efficiency (BEE).

So it is possible to Tame your Energy Guzzling ACs! Start today !

One thought on “HOW TO TAME YOUR ENERGY GUZZLING AIR CONDITIONERS!”